I am excited to be moving back to third grade (all subjects!) for the next school year. I am ready for a new classroom theme. I started teaching way before themes were a thing, but I have had an ocean theme, and currently have an owl theme. I am considering rustic farmhouse-shiplap, wood, metal, chalkboard, a wreath. I need to get started collecting items to use for decorating the room!
0 comments

I am in the process of uploading free items for you to download and use with your students. Please check back and look under the Freebies tab to find whatever you need.
2 comments

My teaching partner and I decided to give our homeroom students the same gifts for Christmas. They will get a small bag filled with a deck of cards, bookmark, candy, and these coupons. You can find an editable version of the coupons here. We plan to print them on red and green paper. Happy Holidays!
0 comments 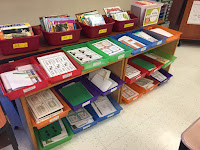 My students are assigned a math center to complete after they finish the independent practice for the daily lesson. At the beginning of each month I organize 20 centers in these trays. The centers are sets of task cards for the standards/skills/strategies that were taught the previous month or months. These centers provide a spiral review in hopes the students will remember how to solve the problems and not forget them throughout the school year. 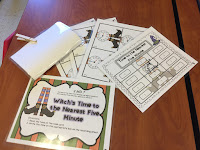 Every day the students get a different tray and by the end of the month they will have completed most of them. I do have 23 students and some have to share the center. Instead of printing the recording sheets, they use a piece of notebook paper. The answer key is folded and clipped with a clothespin. The students use the answer key to check their work before turning it into the basket. This provides them with immediate feedback.
This particular center is a center from third grade. I used this same set-up last year and the trays had not only a set of math task cards, but also a set of language task cards that they completed during the reading block. Because I teach mathematics and science and not reading, I only have to create centers for math this year.
After they complete the "task card" center, they use the laptops to work on math skills at Moby Max, Front Row Ed, and Zearn. As the students work on independent practice and centers, I work with students in small groups. I meet with 2 groups, an extra practice group (for that day's lesson) and a reteaching group (for a standard/strategy that has been previously taught).
0 comments

We have been in school for about 6 weeks and I am just now posting my back to school photos! I am teaching mathematics, science, and RTI and my partner teaches reading, language, social studies, and RTI. This is my first experience with departmentalization and I really enjoy it. I am not sure what took me so long to take the leap! It took about a day to get my classroom ready and since these photos were taken, I have placed my desks in three straight rows and added a rug in one of the corners in the room. The rows allow the students to clearly see during instruction, but provides a shoulder partner for turn and talk. For group work, they choose a different location in the classroom. 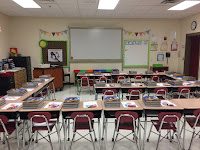 The front of the classroom 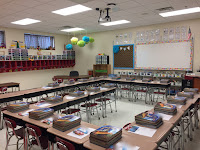 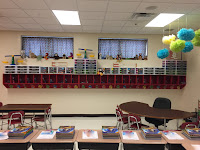 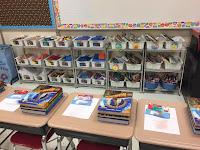 Tubs for math tools and books 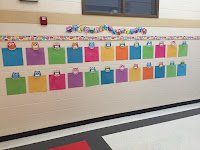 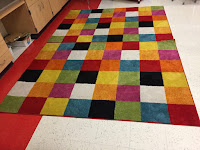 I have missed having a space for my students to meet for some of our whole group lessons.
Most of the rugs I found were too cute, too large in size with an equally large shipping fee, or were just too expensive. I found these 5 x 7 rugs from walmart.com and bought two of them so I would have more than enough room for all my students. Surprisingly, my students enjoy sitting on the rug with their laptops and center tubs during small group time. It was also great to use when demonstrating area! I have a few pom-pom puff balls in blue, green, and yellow hanging above the rug, and will add red, hot pink, and orange to hang over the ceiling space above the rug.

I'm ready for the students! I have finished decorating and organizing the classroom, lesson plans are ready, and copies have been made. These photos were taken before I placed names on their desks. I used owl name plates and placed magnets on the back, then stuck them to the front of the desks. 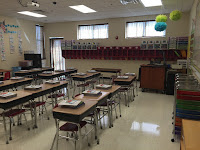 I learned from my first year in third grade last year, that desks arranged in rows facing the front were the most comfortable seating for my students. I can see them, they can see me and the board, but they are still clustered together with other students so they have a shoulder partner or partners. I created a row down the middle because I like to move around. 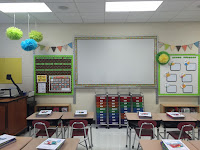 The front of my classroom houses the center carts. I use 20 sets of task cards for math centers and 20 sets of task cards for literacy centers. Usually they use notebook paper to record their answers so I do not have to make so many copies, but I did copy the recording sheets for this month. Each student rotates through most of the 20 drawers throughout the month, so each student has his/her own center everyday. They just take the drawer their desk. I purchased the task cards from many, many TpT authors. I switch the task cards at the beginning of each month. 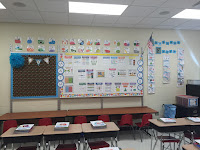 Because the math and literacy centers allow the students to practice many different skills, I use these anchor charts to create a reference wall. I am able to take the math charts off (magnetic) and use them on the document camera during my lessons. 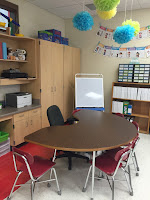 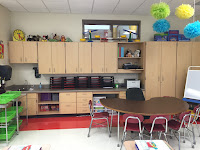 I use the stacking trays on the counter as student mailboxes. I purchased some nifty folders to use this year from Nicky's Folders. I am so excited for the students to use them as a Take Home Folder.

Hallway Display to showcase student work
The owls are hot glued to clothespins and have labels with the student names on them.

I hope you have a great school year!
0 comments

Email ThisBlogThis!Share to TwitterShare to FacebookShare to Pinterest
Labels: Back to School, Classroom Decor, Classroom Displays

Lapbooks remind me of the days when I was a stay-at-home mom. We made them during some of our homeschooling lessons. I think lapbooks are going to be useful once again, but this time in my classroom and with my students!

Next week we are beginning a science unit on Matter (Mixtures and Separating) and a Social Studies unit about South America. I have lapbooks to use with both topics. 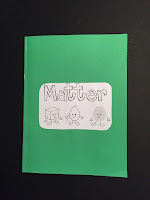 The Matter Lapbook contains pieces from kits I purchased from TpT.
The pieces are mixed and matched from Paper Bag Matter Book from Hooty's Homesroom and States of Matter Lapbook from Amber Polk. Both of these can be found in their TpT stores.
I made some of the pieces to cover other topics that will be taught but were not included in their kits. 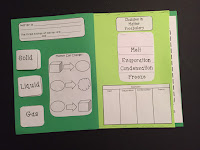 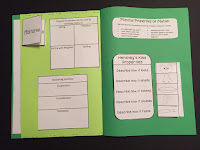 Here are the directions for adding an insert. I needed one so the students can keep their reading passages and notes in one place. It will be easier for them to study for a test when all the information is compact and organized.

This is the lapbook for South America. I created this lapbook and it is in my TpT store
Here is the link to the lapbook.
It includes 5 lessons with reading passages and the lapbook pieces to use as a follow-up activities. 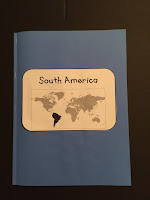 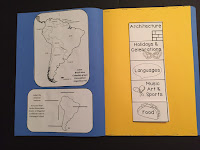 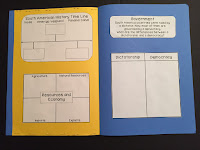 My third graders enjoyed learning about text features. I used textmapping with "text scrolls" to help cooperative groups of students see the entire book. I plan to use these again for other skills (they are great for allowing students to mark text). We covered this skill for three days during whole group reading.

Here are the details:

Day 1- I used these cards from here to create the chart. They are a free download!
As we discussed each feature, the students used the chart to complete notes for each feature using cloze sentences. They "filled in" the important word that was missing for that feature. 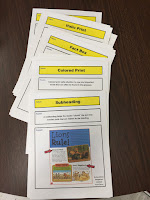 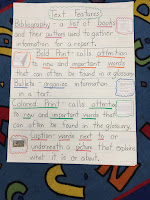 Day 2: The students had a "Scavenger Hunt" to find the text features on the text scrolls. I reduced the cards and had a set at each scroll so they could see if the book had that text feature. They used a recording sheet with all the text features listed and highlighted the ones that were in each book. We had 6 scrolls and I used books from readingatoz.com. 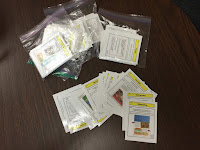 These cards were used at each scroll.
Some groups flipped through them as if they were a deck of cards, and some groups matched the cards to the text feature on the scroll. 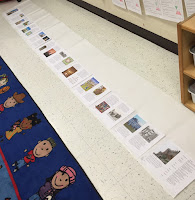 The scrolls were simple to make. Just glue the book in order on a strip of bulletin board paper.
I did go back and staple just the bottom of each book to the paper.
I kept space at the top for text marking. 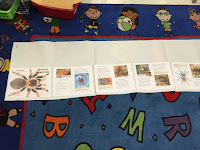 They were warned about this book beforehand and instructed not to scream! 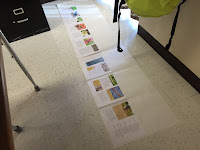 The discussions among the students were so varied-some were confirming the text feature and some were asking for clarification about the text features. The small cards were a great reference.

Day 3: The students were placed in cooperative groups and given 1 text scroll to list all the text features, the page number, and what they learned from that feature.

These were fun and engaging lessons and really had little prep except for the scrolls. I did not let them mark on these so I can use them again. The students could always take ownership of the scrolls and glue the book pages and that would save you some time. Storage is quick and easy, just fold each side over until they meet and place in a flat drawer.

For more information about text scrolls, visit this website.
0 comments

I survived my first nine weeks of third grade. It has been the best quarter of school I have ever had in my career. No joke, third grade is the best, if given the chance you should give it a try. The curriculum is so interesting, they can do so much, and I come to school every day excited about my teaching my lessons.

We just finished up a unit on fractions and all of the math centers were hands-on using manipulatives. I have never seen students so eager to get through the whole group lesson so they could work at the centers. For the most part, my math centers have been used as a spiral review of the math skills taught this year. I use task cards with a recording sheet for the students to complete. I decided to switch it up this week and use some of my familiar tools from kindergarten. 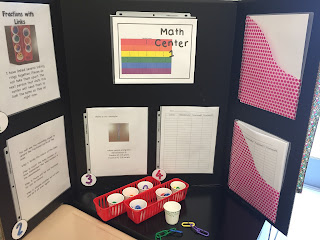 Linking chains in bathroom cups
Students took the chains out and wrote the fractions for each color. 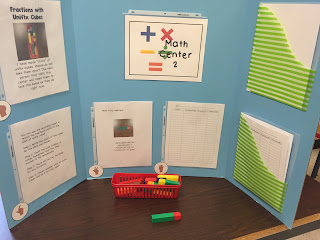 Unifix Cubes
Students wrote the fractions for each color in the stick. 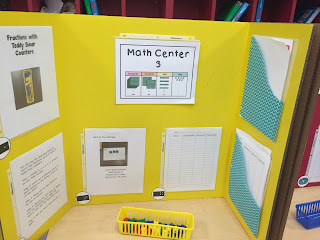 Teddy Bear Counters
Students made a set of bears and wrote the fractions for each color. 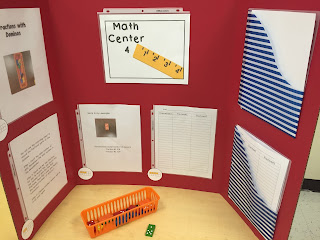 Domino Fractions
Students counted the total number of dots and then recorded the 2 fractions (top, bottom) for the set of dots. 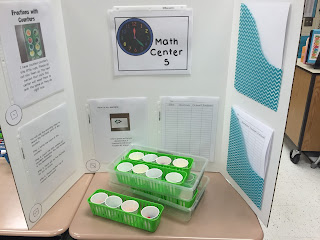 Honestly, these were the easiest centers I have created so far this school year. I did not need to print (or laminate) anything except the notes on the boards and the recording sheets.

I organize my literacy centers this same way and I will post those tomorrow.